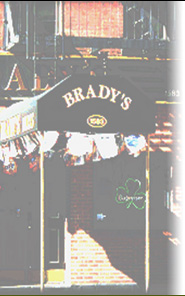 there has been a small bar located on the north-west corner of East 82nd Street and Second Avenue. It was originally known as McGrath’s and rumor has it, it remained “open” even during Prohibition.

In 1961, a bartender named Dan Brady was offered the bar. Dan, who was born in Mullahorn, County Cavan, Ireland, had arrived in the United States in 1956 and owning a bar in New York City was an American dream. This was an offer he couldn’t refuse, and so in May 1961, Brady’s was born. During the 1960s and 1970s, Bradys became a well-known, neighborhood watering hole where many long lasting friendships began and continue to this day.

In 1991, Dan Brady Sr. retired after 30 years and offered the bar to his son, Dan Jr. This too was an opportunity that couldn’t be refused. Dan, a graduate of St. John’s University, was working in the software industry but decided to leave the corporate world to carry on the family business.

Since 1991, Brady’s has undergone some extensive changes. Dan Jr. added 8 large screen TVs with satellite access to all major sporting events, darts, a pool table, Wii, a continuously updated Juke Box and a wide variety of beers and liquors. One thing that hasn’t changed is the friendly atmosphere and neighborhood feel. It has warmed the hearts of many New Yorkers and visitors alike. Please stop by and see for yourself!